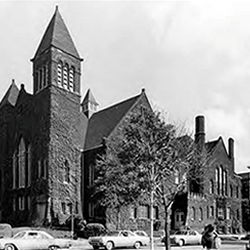 Note: Until July 2014, South Euclid United Church of Christ was called Euclid Avenue Congregational Church and was located in the City of Cleveland.

The forerunner of Euclid Avenue Congregational Church, which later became a part of the United Church of Christ, grew out of Sunday school. The congregation met in homes and barns until a two-story brick building was built in 1845 at the corner of Euclid Avenue and Doan (now East 105th Street in Cleveland).

The tie to the Presbyterian church was severed in 1852. For a decade, the congregation was known as the Independent Presbyterian Church, not adopting the Congregational style of church government until 1862. It was that year the church became the First Congregational Church of East Cleveland.

In 1867, at the corner of Euclid Avenue and Logan, now renamed East 96th Street, a large sandstone building was constructed. At a cost of $25,000, the building became home to a congregation that numbered 109. In 1872, the church changed its name to the Euclid Avenue Congregational Church.

It offered a variety of community outreach programs which included a daycare, the Hough House Service Center, and a program for chemically dependent mothers. In the 1980s, Euclid Avenue Congregational Church was refurbished.

In March 2010, a bolt of lightning struck the church and hit the top of the building. The fire that subsequently swept through was enormous and claiming the building and everything inside. Within days, the congregation moved into the former First United Methodist Church building at Euclid Avenue and East 30th Street and continued to worship there for four years.

Rising from the Ashes

We held our first service on July 6, 2014, realizing that the congregation had truly risen from the ashes. Since that time, South Euclid United Church of Christ has blossomed into a vibrant congregation of over 1,000 active ministry partners spanning six generations. The church remains committed to “transforming the lost into the found, and the found into followers of Jesus Christ who gather, grow, give and go.”

Additionally, SEUCC is active in the community through the B.I.N. (which stands for Bless, Inspire, Nurture) Food Pantry, a monthly grocery distribution program; a job training program for adults with special needs; and a robust social justice ministry that prioritizes voter registration and education.

In November 2017, South Euclid United Church of Christ engaged in a capital campaign known as “A Brave New World.” The church saw that at the intersection of Church and technology, was an opportunity for SEUCC to build a digital platform to reach beyond Greater Cleveland and engage the nation and the world in a powerful environment that develops disciples alongside a liberating theology.

As a result of the campaign, we launched an online campus where the worship experience and Holy Spirit is palpable through the electronic device. Our digital programming promotes connectivity across time zones and provides disciples of Jesus Christ boundless opportunities to grow, develop, volunteer and fellowship.

The best is yet to come.